A wind turbine acts, in some instances, as an attractor and executioner:  The Bat, or a raptor, for example, may circle for prey, and become consumed, eliminated, or wounded to be scavenged elsewhere.  Some species are becoming extinct.  Imagine, then, with about 225,000 turbines worldwide, producing less than ½ of one percent of the world’s power, this level of destruction,  and then imagine a 20% increase in turbine proliferation, which is what some would wish.

Bird and bat mortality numbers just for the USA, estimated to be at least 37 million by experts Paul Driessen and Jim Wiegand, are likely much larger.  The real magnitude of the contribution of wind turbines to habitat disruption and consumption, and obvious mortality, is currently underestimated.

Additionally, the amount of facile and spotty counting of mortality, and the obvious questionable practice of allowing the developer to conduct the studies, is ridiculous.

Governments then providing “kill” or “take” permits, for endangered species, pushes the believability envelope to the limit.  What has been “sold” to the public consciousness, is “green” wishful thinking. What has been “purchased” is the collusion of governments aiding developers to literally condemn Nature and her processes.  The turbine debt will never be repaid.  The Whooping Crane and the Golden Eagle are on their way to extinction. How many other species will similarly be condemned?

If you care, truly care, about wildlife and habitat, and your coexistence with all, and of course your own relationship to food, you will care about wind turbine proliferation.  Please share this site with others.

For all of this, do not imagine that turbines provide meaningful power.

Industrial wind is the largest “con” of the modern age.

The vulture in the video was struck by a wind turbine

“The vulture in the video was struck by a wind turbine at Lentas in the Asterousia mountains of southern Crete. The people filming the event (apparently paragliders) collected the wounded animal and sent it immediately to the Hellenic Wildlife Hospital (EKPAZ) on the island of Aigina where it was diagnosed with a broken wing and a limp. Judging from today’s press release of EKPAZ (the video circulated heavily on the internet in the past two days) every effort is made to help the two year old vulture recover and to be released again one day in its natural habitat, but the outcome is more than uncertain.” (EPAW) 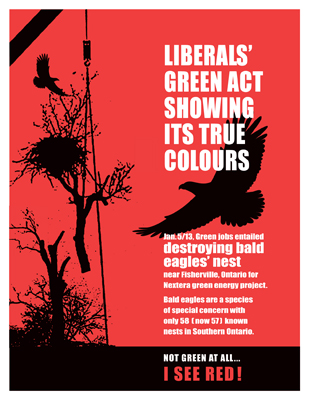 In Ontario, Canada, there are now 57 known remaining Bald Eagle nests, one having been permitted for removal literally late on a Friday, for removal by Sunday, while a pair of Eagles looked on from nearby. This was an active nest, clearly ready for occupancy and by the time protesters could get to the site, which a Biologist hired by the Ministry of Natural Resources said should absolutely be protected, it was too late.
The outrage of this nest removal resonated around the world. It became emblematic of people who similarly are being forced from their homes, displaced from their own space and natural surroundings. It is also emblematic of the psychotic displacement that is going on with respect to an industry that calls itself “green” but is actually a butcher shop. Even endangered species are up for grabs, permits being called “take” permits, with certain numbers allowed to be, maimed, displaced, or killed. Many find this permitting outrageous and nearly beyond imagining.
IN THE NEWS…

I believe that if the public were made aware of the extinction of species coming from these turbines and the mountain of bogus studies the industry has produced, they would want NOTHING to do with these turbines. I also believe the majority of people after hearing the truth would rather conserve energy and would be willing to pay more for other forms of electricity just to shut down these deadly turbines. It is called sharing the world, not devouring it.

I can not stress this enough to people………..From what I have seen from looking at wind industry mortality studies, this industry and our wildlife agencies are so corrupt they might as well all be selling used cars with their odometers turned back at least 90% because this is how bad it really is.

Across the nation official bird and bat kill estimates have been derived from studies rigged to hide mortality. The real numbers are at least 10 times the amount being reported and sometimes it is far more.   Altamont Pass has reported less than a hundred dead bats in 30 years of service but thousands have been killed there.  This industry is set up to hide mortality and the latest “incidental take” or “Kill permits” for a few endangered bats could end up being 5000. A single permit for an eagle could easily end up with dozens being killed.

A generation ago these were the people we incarcerated and ran out of our neighborhoods. Now these same people have been put on a path of massive industrial blight and extinction of species. This man-made disaster will be the wind turbine legacy we hand our children.

Despite what this industry and their bogus studies claim they are never going to solve one man-made disaster, climate change from unbridled human related activities, with more of the same (wind turbine blight).  It simply is not possible.

No matter how anyone feels about wind turbines, no one should condone the corruption, the silent fraud, and bogus studies supporting this industry.

In a criminal trial if a defendant is caught lying they lose all credibility with the jury. I have caught this industry in hundreds of lies while trying to cover-up their wind turbine mortality. “
~ Jim Wiegand, Wildlife Biologist, Expert in Wind Turbine Bird & Bat Mortality

[ppm_all_carousel]
Thank you for visiting. We hope you will let us know if there is information that should be added.
This is a subject that has hidden in the corridors of turbine power for too long. We would like to expose the developers, their minions and any cooperating agency, some of which may surprise you, as part of a massive assault on Nature.
Categories