2) The extremely low air pressure surrounding a wind turbine has been discovered to be the cause of the high numbers of bat deaths. A bat’s lungs are very delicate, and it seems the low pressure might cause them to expand to the point of bursting blood vessels.

3) Wind turbines emit an infrasound (below 20hz) and the corporeal effects of this sound vibrate the eardrum. Infrasound cannot be heard but can be carried through the atmosphere for thousands of kilometers and is believed to cause certain breathing and digestive problems in humans and animals.

4) Wind turbine blades can rotate at up to 80 meters per second, or about 180 miles per hour.

6) The base of a typical steel tower is anchored in a platform of more than a thousand tons of concrete and steel rebar, 30 to 50 feet across and anywhere from 6 to 30 feet deep

7) The largest offshore wind turbine ground-to-tip height is 197 metres, more than twice that of the Big Ben clock tower in London. 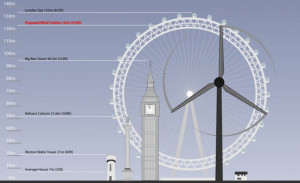 8) Commercially sized turbines have a capacity of up to 5 million watts. In order to convert wind energy into electricity an average wind speed of 14 mph is required.

9) Hawaii houses the largest wind onshore turbine in the world. It has rotors that are the entire length of a football field. The turbine stands at 20 storeys high.