Battle over wind turbines in the land of Sleeping Beauty

Plans to expand wind energy into the most scenic parts of Germany are fueling increasing opposition across the country.

Anti-wind campaigners are angry that areas including the forests made famous by the tales of the brothers Grimm are among the targets for new turbines.

For the first time they have formed a national opposition group to thwart the expansion.

They say the growth of wind will damage forests and tourism across the country.

There is nobody who stands up and tells the truth, we have to stop now”

Germany has embarked on a massive expansion of renewable energy in the wake of the Fukushima nuclear disaster in 2011. Chancellor Merkel’s government decided to phase out atomic plants more rapidly and instead increased the opportunities for green power.

WSith guaranteed prices for 20 years thanks to feed-in tariffs enshrined in law, solar farms, biogas plants and wind parks have boomed. There are now 1.3 million small co-operatives and households supplying renewable energy to the grid.

This Energiewende or energy transformation has been remarkably successful, with 22% of Germany’s electricity being generated by renewables in 2012. Wind has played a major part in this change, and the public has been generally supportive, despite rapidly increasing energy bills. 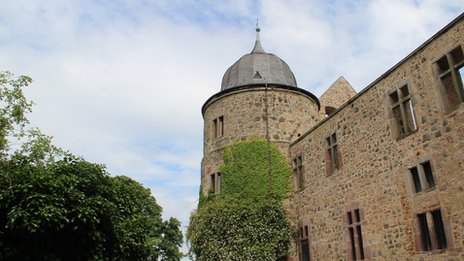 Sleeping Beauty reputedly slept for 100 years in this castle in Sababurg, just across the valley from the home of Rapunzel

To date, a majority of the 23,000 wind turbines in the country have been built in the flatter north and eastern parts of the country. But now the focus of expansion is on the picture postcard areas of dark forest and lush green hills in the central and southern areas of Germany.

One such region is the Rheinhardswald in the northern part of the state of Hesse. This is the home of the magical tales of Sleeping Beauty, Rapunzel and others, made famous in the books of the brothers Grimm.

This quiet, scenic place is a magnet for tourists from all over the world.

But now there are also plans to build up to 200 turbines on the surrounding hills.

Ann-Kathrin Blankenberg is a PhD student and a vocal opponent of the plans.

“It is not because this is the area of Sleeping Beauty,” she says.

“I want the green movement, I want green technology, I don’t want nuclear power – but they should be made in the right way and not by destroying the forest.

“We have here special, old growth forest and some species just live in this area and are in danger because of the turbines.”

The campaigners argue that putting wind turbines in this area makes no sense. The wind speeds are low and the area is home to some extremely rare birds including the endangered black stork.

Across Germany, the plans for expansion have pitted green against green – the potential damage to natural resources from the building of turbines seems to be the biggest concern for opponents. 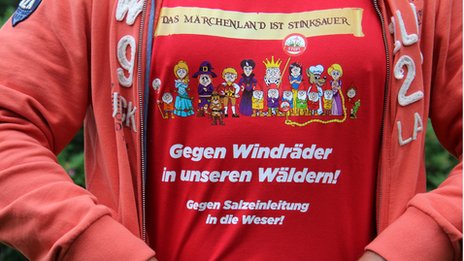 About 170 regional groups opposed to wind energy have now formed a national organisation called Vernunftkraft, to fight the expansion of turbines. They are trying to get enough signatures on a petition to force the German parliament to debate the future direction of the Energiewende, especially the subsidies for wind energy.

Wind bubble
Some of those involved believe that unlike solar power, which has been adopted by many individual householders, wind parks are essentially speculative investments with electricity consumers guaranteeing a return for developers. 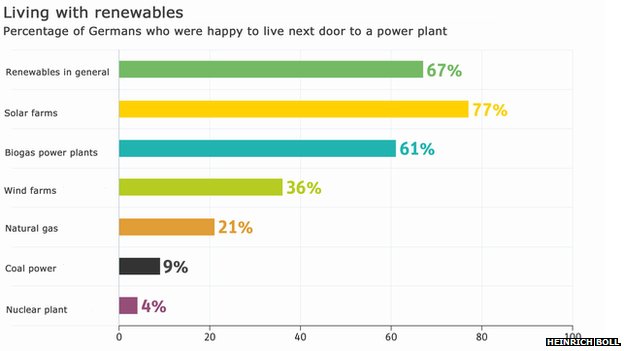 At his sleek workshop near Wiesbaden, several hundred kilometres away from the fairytale forests of Sleeping Beauty, Markus Storck designs some of the greenest machines on the planet.

His crafted, lightweight bicycles have won dozens of awards. His products sell all over the world and he has also experimented with electric bikes.

But he is now vehemently opposing the expansion of wind energy in Germany, and is highly critical of developers and the subsidies that bolster their projects.

“They are getting people to invest by telling them they can make money with it, but people will also lose like with the internet. I would call it a wind bubble,” he says.

“There is nobody who stands up and tells the truth, we have to stop now.”

While the protestors are becoming more organised, they still represent a relatively small section of society.

Opinion polls continue to show widespread political support for the energy transformation and for wind energy as well. There is a common belief that opponents of wind are “nimbys” – short for “Not In My Back Yard” – who only complain because the turbines are coming to their local areas. 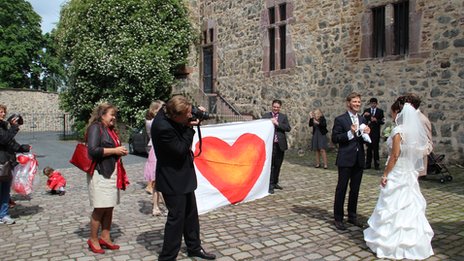 Hans-Josef Fell is the Green MP who is sometimes called the father of the feed-in tariff. In 2000, he wrote the draft of the Renewable Energy Source Act that kick-started the energy transformation. He characterises the opponents of wind as small, aggressive groups.

“They don’t bother to have an honest discussion, because they want to prohibit a wind turbine in their backyard,” he says.

“They don’t recognise that by doing so, other people have to deal with the consequences of an opencast coal mine or radioactive waste storage.”

There are other issues associated with the energy transformation that are troubling environmentalists. The shutdown of nuclear reactors in the south of the country means there is a need to transfer energy from the north. New, high voltage cables are needed to link onshore and offshore wind parks to consumers and industry.

But critics are worried that these new cables will not only damage the landscape, they could also be a risk to public health.

Going undergroundThere are demands from the Green party that the wires be buried where possible. But many landowners are unwilling to, quite literally, give ground for the projects.

In the central university town of Goettingen, local Green party councillor Harald Wiedemann has concerns about how these plans will work.

“The problem is, on the one hand the cost, and on the other is the electro-magnetic field – no one has said they will have 1,000kw cables here but in future it is possible”, he says. 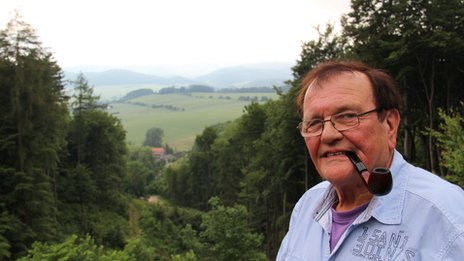 “We have to build these cables really far away from towns – it is too expensive to put them underground for such a long distance, no-one can pay.”

Whether people are objecting to electricity pylons or the building of wind turbines, much of the opposition appears to be practical and not grounded in climate change scepticism. A majority accept that rising temperatures and the need for secure, sustainable energy sources means the energy transition must go ahead.

Back at the home of Sleeping Beauty, the opponents of turbines insist that they are open to compromise.

Guenter Koseck, the owner of the castle at Sababurg that is reputed to have been the home of the slumbering princess, says this is not an ideological fight.

“We want to move to green energy, and it has to be located somewhere. Without any question I would accept it here, as long as the arguments are right.”