Using the same logic, the asbestos industry could be reborn!

It would just have to say: my products kill fewer people than car accidents. Wouldn’t that be fun!

All they’d have to do is finance electoral campaigns left and right, and the corrupt system would do the rest.

It may be true, at this stage of the game, that wind turbines kill less birds than do cars and cats. But they kill rarer birds, and twice as many bats (which cars, cats, windows etc. don’t kill). In addition, they are on their way to killing 20 times more when the number of turbines is multiplied by 20, as are planning the wind industry and their gnomes.

There are plenty more reasons to reject the silly cars & cats argument: 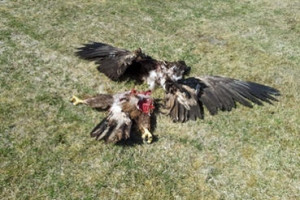 A) They say: only 573,000 birds are killed yearly by wind turbines in the United States, and 888,000 bats – total: 1.4 million deaths. And they add: this is small in comparison to the many millions killed by other human activities. They conveniently forget that wind turbines are the only human activity that kills BATS – if you accept the taking down of roofs, houses, buildings and other constructions. But apart from that, there is another, much higher and much more likely estimate: 13 to 39 million birds and bats killed annually by wind turbines in the United States – based on an extrapolation from Spanish monitoring reports.

It is a valid extrapolation, for there are no reasons to believe that US birds are smarter or more cautious than Spanish ones. Figures from Germany and Sweden confirm this high level of mortality, as published by the California Energy Commission.

Is it really surprising that a wind turbine would kill on average one bat a day and one bird every other day? – especially if you consider that bats, and some birds, are attracted to wind turbines, as per the latest paper by Clive Hambler, lecturer at Oxford University: http://wcfn.org/2013/07/01/tip-of-the-iceberg/

The low official estimate of 1.4 million can be explained by deficiencies shown by Jim Wiegand here: http://www.windturbinesyndrome.com/2013/wind-energys-colossal-lies-about-bird-bat-mortality-wildlife-biologist/ and by these added considerations: it is a well-known fact that windfarm employees make carcasses disappear. If this weren’t enough, reporting mortality to the authorities is the responsibility of each wind farm operator. Is this a joke? – No, it isn’t, would you believe?

Such cynicism, such blatant disregard for ethics, such insults to our intelligence are reminiscent of the much scorned-upon “banana republics” of yesteryear. But since lobbying is a legal activity in America, Europe, Australia, Japan, etc., don’t expect ethics to be upheld there either. As for the media, being “politically correct” means turning a blind eye to any wrong that bears a “green” label, even if it is the yearly death of 123 million birds and bats from 225,000 wind turbines worldwide, to be soon multiplied by 20 (see above), i.e. 2.4 billion deaths a year.

B) – Nothing justifies the mass killing of eagles, cranes, storks, and most bird and bat species, by wind turbines and their power lines. The limited success, to date, in stopping other causes of bird and bat mortality does not justify adding another killer! It’s a no-brainer that this is a crooked argument, yet the PC media swallows it whole – hook, line and sinker!

C) Two wrongs don’t make a right, they never did. But they deny this, and are trying to force this denial into our brains, by sheer repetition. They are busy brainwashing our children too, in schools! Teachers have become the peddlers of their lethal products. It is quite simply sickening. What happened to our democratic ideals? We are living a scenario written by George Orwell.

As they don’t replace other causes of mortality, they are just creating an ADDITIONAL one. That too is a no brainer, yet they are trying to convince the public that additional mortality is OK, precisely at a time when birds are being decimated worldwide. And it’s not Global Warming (what global warming? – global cooling is now more likely) that’s killing them – read this disturbing article:
http://ngm.nationalgeographic.com/2013/07/songbird-migration/franzen-text
C´mon, public, wake up!

The accomplices of BIG WIND, in bad faith, deny (by omission or otherwise) that a single drop can spill a full glass, and that measuring the CUMULATIVE EFFECT is essential to the work of conservationists. Third grade students would fail their exams if they denied such universal truths. And I am NOT talking about just a drop: I’m talking about a dripping faucet, I’m talking about 2.4 billion deaths a year (as per above).

Shame on them! They bear the full responsibility of the extinctions to come in which wind turbines (and their power lines) will have contributed. This is why I call them stooges, or gnomes. They don’t deserve respect, and they won’t get mine. I invite everyone to call them “green gnomes” from hereon in, or “gneems” by contraction.