There is a very important story here. All this is being kept quiet while the wind industry is busy building new wind energy projects and being permitted for many others.

Since 2007, the installation of wind turbines has increased over 400% in the states Texas, Iowa, and Oklahoma. These are very important migration stops for the Whopping Crane population. The numbers below do not LIE. I am 100 percent sure they have been getting hammered by the wind turbines in the central flyway. 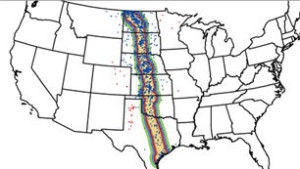 In the 12 month period between July of 2008 and June 2009 57 whooping cranes died with 53 bodies that were never recovered. I had to dig to get this information.

be this year and the population will decrease. Since 2006 crane mortality has risen both in percentage and actual numbers. This is extremely important and the stagnant numbers do not lie. The Whooping crane population was rising steadily until 2006 but since then, the central flyway population has hit a wall from too much yearly mortality. Look at the numbers below, The recruitment into the population has been stagnant for 5 years.

The drought has been the official reason given for the dead whooping cranes since the 2008-2009 season. Yet we are also being told “scientists do not know the main cause or locations(of death)”. This year it has been documented that they are changing their migration behavior. I want everyone to understand something else about these birds that has to do with their changing behavior or dispersal. This could be a fear response from some of the older ones in the flock steering the family groups the dangers of the turbines after having seen other group members pulverized by wind turbines.

So how do you smoke them out? The public should be getting age class information for each individual but it is nowhere to be found. This will tell you more about the population and recruitment level. The core of the population, is the nesting population. These are the birds that have made it to adulthood and should be living long lives, 20 years or more. It is not happening. Since our government agencies have a history of rigging data, the public should demand transparency which would include images of all nest sites. The public should also demand actual count numbers and none of the new “survey estimates” that will hide what is happening.

This was done with the Golden Eagle Surveys in the Western US population, where figures are now greatly exaggerated. There is also another easy way for them to compensate or rig the data, that is to short count the fledglings. By doing this they will not have to account for them as being dead or missing knowing in advance many will perish during the migration. The production of all age class information will shut this down. Lastly watch the breeding facilities closely to see where they are placing each individual. The truth is mortality could even be worse in the central flyway population if they are putting in captive bred birds every year.

I know the wind industry pumps a lot of money into the Whooping Cranes, but this should not silence any recovery organizations. Every organization involved should formally demand to see the all the data including all the current GPS records. The public has a right to know.

This year, 2012, there are dozens of missing cranes. It looks like they have started covering their asses and have changed their way of doing the surveys.

In previous years, the refuge gauged the whooping crane population by counting individual birds within the survey area. The aerial surveys objective was focused on counting every individual bird regardless of where they were located within the survey area. Because the population is supposedly increasing (increasing?) and this is no longer feasible, this year the refuge began a new technique(rigging the numbers with inflated estimates like they did with the golden eagle). Biologists are flying along a grid, specific lines set at specific distances within the survey area. Whereas before each survey consisted of a single flight, now one survey includes three flights done on three separate days (weather permitting) within a preset time frame.

The birds counted are used as a percentage to determine the population as a whole. It is expected that some birds will be not be included in the count but this method (known as Distance Sampling) is commonly used to determine rare and endangered wildlife populations, including fin whales, Karner blue butterflies, and raptors.

Since the 1950s, 525 AWBP (Aransas-Wood Buffalo Population) whooping cranes have died (most of these deaths are recent) with only 50 carcasses recovered, and approximate cause of death was determined in only 38 instances.Yet for the Western population the records are non existent. It looks like the western population is raising a large number of young but the population is not growing. If 80% of the reported dead are dying on the migration, then by my calculations the flock losses are now about 40 per year during the migration. It could even be higher because numbers are being pumped up by captive breed offspring.

This is a very interesting and damning fact – For the Eastern population nearly every death is accounted for.

But for the central flyway population scientists do not know the main cause or locations…………. I know why, it is because of the Wind Energy Development. You also have to know that it would be an easy task to add more transmitters to get exact numbers giving locations to bodies. This technology has been available for decades. A good place to start looking for Whooping Crane bodies is in Texas, Iowa, and Oklahoma. Texas and Iowa are now the top 2 producers of Wind energy in the US*.

Whether you believe it or not, there is an undeniable cloak of secrecy surrounding the only Central Flyway Whooping Crane population.

Look at this nonsense- The Canada/US Whooping Crane Recovery Team wants to ensure that there is a stable population of at least 40 breeding bird couples and two other populations of 25 breeding couples before the status of the Whooping Crane is changed from “endangered species” to “ threatened species”.

They only possible explanation for the conservation groups to go along with this insanely low number and stay silent is probably because the industry is the primary financer of the recovery. These groups are probably getting a lot of money and have to stay silent. 180 nesting pairs of any species is endangered, and always will be. This program, like the condor program was a bullshit back door deal set up between the conservation groups and the USFWS, with the wind industry calling the shots.

The Condor recovery is similar
Condor Recovery Program Goal: In order to be downlisted from Endangered to Threatened, The Recovery Goals of the California Condor Program are as follows:
– Maintenance of at least 2 wild populations
– Maintenance of one captive population
– Each population must:
-number at least 150 individuals
-must contain at least 15 breeding pairs
-be reproductively self sustaining
-have a positive rate of population growth
– Non-captive populations must:
-be spatially disjunct and non-interacting
-contain descendents from each of the 14 found

So when there are 300 condors out hanging around their permanent feeding stations in this mockery of a recovery program, the wind industry is going to petition the USFWS to have the condor taken off the endangered species list.

(Author note) This travesty impacts anything that flies – cranes, endangered California Condors, eagles, gulls – even BATS are struck down by these archaic monstrosities, knocked out by the change in air-pressure around the whirling blades and then bludgeoned by the turbines. More, fisheries and offshore birds are decimated by offshore installations which destroy sensitive ocean-beds and draw gliding birds to their deaths.

Not a very good track-record considering these wind farms advertise themselves as GREEN (Earth-friendly) energy producers.

Remember, most wind installation projects are actually Big Oil and Coal Corporation endeavors. And – we’ve all seen how much we can trust Big Oil and Big Coal.

If you care about TRULY Earth-friendly technology, tell your local and Federal decision-makers that it is not acceptable to chop up our wildlife for so-called ‘green’ energy. There ARE nonlethal and truly green, sustainable energy alternatives that are currently being suppressed by the mega Oil, Coal and Wind corporations.