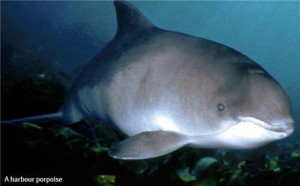 The European Commission has stepped in over controversial plans to position one of the world’s biggest offshore wind farms between Wales and Devon.

The £3bn Atlantic Array wind farm between Cornwall and Swansea Bay would see around 250 turbines built between Lundy Island and Gower by Swindon-based RWE npower renewables.

But allowing the development, which includes the Outer Bristol Channel, would breach European Habitat Directives.

The EU Commission has confirmed it is taking infringement action against the UK Authorities for failing to adequately protect native harbour porpoises. 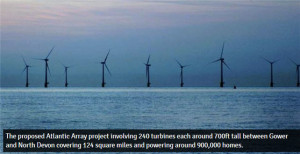 In a letter to the Porthcawl Environment Trust (PET) – which lodged a legal complaint alongside the World Wildlife Fund (WWF) – the European Commission said a letter of formal notice has been issued to the UK Government.

PET said it has been battling for eight years to ensure that harbour porpoises and their habitat was protected by the terms of the EU Habitats Directive.

The group claims the government is ignoring the importance of the Outer Bristol Channel site as a breeding site for the marine life because of its interest in developing offshore windfarms.

In its letter, the European Commission, said it had “received a wide ranging complaint and expert report on the failure to propose protection sites for the harbour porpoise from WWF”.

It added: “As a result of our investigations we have now decided to follow this matter up with infringement action under Article 258 of the Treaty on the Functioning of the European Union.”

The Commission raised concerns about the failure to identify for the protection of the harbour porpoise for a number of sites including the Outer Bristol Channel.

It added : “Damaging activities such as fishing and projects with the potential to cause acoustic disturbance have not been adequately considered. These include, for example, offshore windfarm developments such as those being considered in the Outer Bristol Channel which are being allowed to progress potentially without sufficient regard to the needs of the protection of the species.”

Brain Saunders, spokesman for PET said the group formed a decade ago with the aim of ensuring that the harbour porpoise and their habitat was protected.

“In our view the current situation with regard to the Outer Bristol Channel has created a ‘political impasse’ and a conflict of interest.”

He said the Scarweather sandbank and the waters of the Outer Bristol Channel are used by the harbour porpoise as a breeding site and resting place.

“The Government and its Nature Conservation Agencies favour off-shore wind farms, therefore it is not in their interest to comply with the Rule of Law laid down in the Habitats Directive as in this case the developer RWE has been granted a licence by the Crown Estate to build a large wind farm development in the Outer Bristol Channel.”

“Before an offshore wind farm is built, developers have to prove that it won’t have a detrimental effect by providing a robust Environmental Impact Assessment.

“Research has shown that offshore wind farms do in fact create havens for wildlife, and there are a number of on-going projects to mitigate any impact during the construction phase.

“Leading wildlife and conservation organisations, including WWF, repeatedly state that the biggest threat to wildlife is climate change, which is why they support wind power as a way of tackling the effects of global warming.”

A Defra spokeswoman said: “We are committed to protect the harbour porpoise, and are working to identify further sites to protect these species in line with EU requirements.

“Already we have taken action including introducing measures to prevent accidental entanglement in fishing nets.”

A WWF spokesman said: “The WWF complaint to the European Commission regarding harbour porpoises is separate from the complaint lodged by Porthcawl Environment Trust.

“WWF did submit a complaint about the lack of site designations for the protection of the harbour porpoise.

“We did not do this in conjunction with PET, who made their own complaint. WWF’s complaint related to the general protection afforded to harbour porpoises in the UK and was not specifically targeted at any individual developments.

“If done right, we see no reason why marine conservation and renewables can’t coexist if appropriate and effective checks are put in place alongside mitigation measures to avoid and minimize negative impacts”