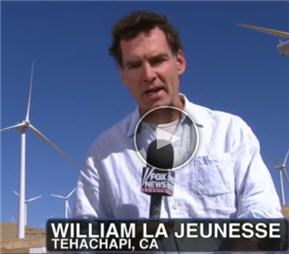 August 16, 2011 – As California attempts to divorce itself from fossil-fueled electricity, it may be trading one environmental sin for another — although you don’t hear state officials admitting it.

Wind power is the fastest growing component in the state’s green energy portfolio, but wildlife advocates say the marriage has an unintended consequence: dead birds, including protected species of eagles, hawks and owls.

“The cumulative impacts are huge,” said Shawn Smallwood, one of the few recognized experts studying the impact of wind farms on migratory birds. “It is not inconceivable to me that we could reduce golden eagle populations by a great deal, if not wipe them out.”

California supports roughly 2,500 golden eagles. The state’s largest wind farms kill, on average, more than 80 eagles per year. But the state is set to triple wind capacity in the coming years as it tries to become the first state in the nation to generate 33 percent of its electricity from clean energy sources by 2020.

“We would like to have no bird deaths and no bird injuries. But, once again, we have to balance all the needs of society. All the people who want to flip their switch and have electricity in their homes,” said Lorelei Oviatt, Kern County planning commissioner.

Kern County has identified some 225,000 acres just north of Los Angeles as a prime wind resource area. Unfortunately, the area’s rolling hills and mountains are prime hunting grounds for raptors and a layover spot for migratory birds traveling between Canada and Mexico. The updrafts enjoyed by birds of prey are ideal for generating power.

“I’m not against wind power — it is a viable form of energy generation — but it needs to be developed more carefully,” Smallwood said.

Case in point: In the Bay Area, when activists in the 1980s demanded a cleaner planet, the state responded with the Altamont Pass Wind Resource Area. The state-approved wind farm, built with federal tax credits, kills 4,700 birds annually, including 1,300 raptors, among them 70 golden eagles, according to biological reports generated on behalf of the owners.

Smallwood said replacing the small, older turbines with larger blades has cut some species fatalities roughly in half.

“We’re requiring full environmental impact reports, which take at least 12 to 18 months,” Oviatt said. “Can I promise that a bird will never be injured or killed? I can’t. But again, we have this tradeoff in society, between the things we need to function as an economy and the fact that we wanna make sure we have an environment for future generations.”

Pine Tree is one of the wind farms in Kern County and is operated by the Los Angeles Department of Water and Power. According to an internal DWP bird and bat mortality report for the year ending June 2010, bird fatality rates were “relatively high” at Pine Tree compared to 45 other wind facilities nationwide. The facility’s annual death rate per turbine is three times higher for golden eagles than at Altamont.

“Politics plays a huge role here,” Smallwood said. “Our leaders want this power source so they’re giving, for a time being, a pass to the wind industry. If you or I killed an eagle, we’re looking at major consequences.”

Smallwood and others say it is almost inconceivable the U.S. Fish and Wildlife Service, which enforces the U.S. Endangered Species Act, the Bald and Golden Eagle Protection Act and the Migratory Bird Treaty Act, hasn’t acted.

“There’s a big, big hypocrisy here,” Sue Hammer of Tehachapi Wildlife Rehab in Kern County said. “If I shoot an eagle, it’s a $10,000 fine and/or a vacation of one to five years in a federal pen of my choice.”

She’s not far off from the reality.

In 2009, Exxon pleaded guilty to causing the deaths of about 85 migratory birds in five states that came into contact with crude oil in uncovered waste tanks. The fine for this was $600,000.

Likewise, PacifiCorp, an Oregon utility, owed $10.5 million in fines, restitution and improvements to their equipment after 232 eagles were killed by running into power lines in Wyoming.

And in 2005, the owner of a fish hatchery was ordered to serve six months in a federal halfway house and pay a $65,000 fine for shooting an eagle that was feeding at his uncovered hatchery.

Wind power in the U.S. generates 41,400 megawatts of electricity. California represents just a fraction of that total, suggesting the number of raptor kills is considerably higher nationwide. Yet according to records, USFWS has not prosecuted a single company for violating one of the many statutes protecting threatened and endangered birds.