Europe Pulls The Plug On Its Green Future

As country after country abandons, curtails or reneges on once-generous support for renewable energy, Europe is beginning to realise that its green energy strategy is dying on the vine. Green dreams are giving way to hard economic realities. 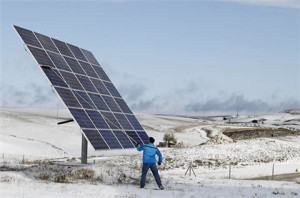 Slowly but gradually, Europe is awakening to a green energy crisis, an economic and political debacle that is entirely self-inflicted.

The mainstream media, which used to encourage the renewables push enthusiastically, is beginning to sober up too. With more and more cracks beginning to appear, many newspapers are returning to their proper role as the fourth estate, exposing the pitfalls of Europe’s green-energy gamble and opening their pages for thorough analysis and debate. Today, European media is full of news and commentary about the problems of an ill-conceived strategy that is becoming increasingly shaky and divisive.

A study by British public relations consultancy CCGroup analysed 138 articles about renewables published during July last year in the five most widely circulated British national newspapers: The Sun, The Times, The Daily Telegraph, Daily Mail and Daily Mirror, which enjoy a combined daily circulation of about 6.5 million.

“The analysis revealed a number of trends in the reporting of renewable energy news,” the study found. “First and foremost, the temperature of the media’s sentiment toward the renewables industry is cold. More than 51 per cent of the 138 articles analysed were either negative or very negative toward the industry.”

More than 80 per cent of the articles appeared in broadsheet titles The Times, The Daily Telegraph and the Daily Mail, the report says, “but 55 per cent of these articles were either negative or very negative about the industry”.

EU members states have spent about €600 billion ($882bn) on renewable energy projects since 2005, according to Bloomberg New Energy Finance. Germany’s green energy transition alone may cost consumers up to €1 trillion by 2030, the German government recently warned.

These hundreds of billions are being paid by ordinary families and small and medium-sized businesses in what is undoubtedly one of the biggest wealth transfers from poor to rich in modern European history. Rising energy bills are dampening consumers’ spending, a poisonous development for a Continent struggling with a severe economic and financial crisis.

The German Association of Energy Consumers estimates that up to 800,000 Germans have had their power cut off because they couldn’t pay the country’s rising electricity bills; among them, German newspaper Der Spiegel reported last October, are 200,000 long-term unemployed.

As The Washington Post writer Charles Lane observed at the time: “It’s one thing to lose your job because a competing firm built a superior mouse trap; it’s quite another, justice-wise, to lose it because a competitor talked the government into taking its side.”

Two weeks ago, the Czech government decided to end all subsidies for new renewable energy projects at the end of this year. “The reason for this law amendment is the rising financial burden for electricity consumers,” Prime Minister Jiri Rusnok said. “It threatens the competitiveness of our industry and raises consumers’ uncertainty about power prices.” In recent years, almost all EU member states also have begun the process of rolling back and cutting green subsidies.

Spain is a particularly cautionary tale. By failing to control the cost of guaranteed subsidies, the country has been saddled with €126bn of obligations to renewable-energy investors.

Now that the Spanish government has dramatically curtailed these subsidies, even retrospectively, more than 50,000 solar entrepreneurs face financial disaster and bankruptcy.

Germany, however, is the nation that has pushed the renewables agenda furthest and is struggling most with the unintended damage of the green energy shift, its so-called Energiewende.

Germany’s renewable energy levy, which subsidises green energy production, rose from €14bn to €20bn in just one year as a result of the fierce expansion of wind and solar power projects. Since the introduction of the levy in 2000, the electricity bill of German consumers has doubled.

German households will pay a renewables surcharge of €7.2bn this year alone. In addition, consumers will be affected by indirect costs because industry, trade and commerce pass on their rising energy costs in product prices. And because green energy subsidies are guaranteed for 20 years, the costs threaten to rise exorbitantly as more schemes are being agreed. Energy bills are going through the roof, fuel poverty is rising and renewable energy policies face a growing public backlash. What is more, governments are increasingly concerned about the threat to Europe’s industrial base.

Germany has the most expensive electricity in Europe, with an average price of 26.8 euro cents (40c) a kilowatt hour. No wonder Chancellor Angela Merkel has warned that the rapid expansion of green energy programs is weakening Germany’s competitive advantage in the global economy.

The EU also is quietly rolling back its renewable agenda, which EU leaders now recognise has been raising energy prices across the Continent. At their summit in Brussels in May, leaders indicated that they intended to prioritise the issue of affordable energy over cutting greenhouse gas emissions.

The EU summit signalled Europe intended to restore its declining competitiveness by supporting the development of cheap energy, including shale gas, while cutting green energy subsidies.

However, EU environment ministers are alarmed at the prospective rollback. They are seeking to prevent the development of EU shale resources by trying to introduce EU-wide environmental barriers.

Until recently, Europe had positioned itself as the global leader in climate protection and renewable energy, with Germany leading the way with ambitious targets and generous subsidies that boosted solar power and wind energy.

More than half of the world’s solar panels are installed in Germany. On June 6, Germany’s solar power production touched a new record of 23.4 gigawatts, meeting almost 40 per cent of the country’s entire peak electricity demand. But to understand that this record is quite meaningless, consider the grid’s narrow escape last winter. For many weeks in December and January, Germany’s 1.1 million solar power systems generated almost no electricity. During much of those overcast winter months, solar panels more or less stopped generating electricity. To prevent blackouts, grid operators had to import nuclear energy from France and the Czech Republic and power up an old oil-fired power plant in Austria.

Subsidies are extremely generous and guarantee investors an almost 10 per cent annual return for 20 years. Given such an unparalleled offer, it is not surprising that more than a million families already have installed solar panels. This solar boom, however, has saddled the country with obligations of more than €130bn in subsidies, leading to ever increasing energy prices.

As wealthy homeowners and businesses owners install solar panels on their homes and commercial buildings, low-income families, living in rented apartments, have to foot skyrocketing electric bills. Many can no longer afford to pay, so the utilities are cutting off their power.

To stop the solar boom, the government has reduced feed-in tariffs for photovoltaic schemes in the past few years. Since 2010, however, more than 5000 companies involved in the solar business have closed, shedding tens of thousands of green jobs.

Germany’s biggest companies, such as Siemens and Bosch, are abandoning the industry too. Their renewable energy strategies resulted in costly debacles. Siemens, Europe’s largest engineering company, announced in June that it would close its entire solar division, at a loss of about €1bn. Last month the Siemens board fired its chief executive, Peter Loescher. His dramatic dumping was seen in the context of a catalogue of disastrous misinvestments in the green energy sector he presided over.

For Bosch, another German giant, its move into solar ended in disaster too, costing the electronics company even more than Siemens: about €2.4bn.

During the past year, the wave of bankruptcies in solar has devastated the entire industry, while solar investors have lost almost €25bn on the stockmarket.

Now Germany plans to phase out subsidies altogether, its solar industry is likely to disappear by the end of the decade.

Most observers were convinced the energy gap caused by Germany’s decision, two years ago, to phase out nuclear power would be filled by wind and solar power. Hardly anyone realised that the extraordinary boom in renewable energy construction would generate a coal boom too.

In fact, German CO2 emissions have been rising for two years in a row as coal is experiencing a renaissance. But CO2 emissions in the EU as a whole are likely to rise because of increased coal burning at power stations. The revelation has embarrassed the German government and dumbfounded the public, which cannot understand how a nation that has expanded renewable energy more than any other country is building 20 coal-fired power stations.

In much of Europe, coal has become much cheaper than natural gas for power generators. The reason is the collapse of the EU’s emissions trading scheme and the subsequent decline in carbon prices, which make coal plants more economical than gas-fired power plants.

So far Europe’s emissions trading scheme has cost consumers more than €300bn. Massive amounts of green investments originally projected on the back of a high carbon price have been shelved and are no longer feasible. There can be little doubt Europe’s flagship climate policy has turned into an utter failure. In a realistic assessment of Europe’s policy shift, the International Energy Agency recently noted that “climate change has quite frankly slipped to the backburner of policy priorities”.

Of all the unintended consequences of Germany’s Energiewende perhaps the most extraordinary is the detrimental effect of wind and solar schemes on the price of electricity generated by natural gas. Almost 20 per cent of gas power plants in Germany have become unprofitable and face shutdown as renewables flood the electricity grid with preferential energy. To avoid blackouts, the government has had to subsidise uneconomic gas and coal power stations so that they can be used as back-up when the sun is not shining, the wind does not blow and renewables fail to generate sufficient electricity.

The mess is forcing struggling utilities to contemplate even more radical solutions. E.ON, Germany’s biggest energy company, is thinking of dismantling some of its European gas power plants, mothballed because they are no longer profitable, and relocating them outside the EU. Such farcical considerations become symptomatic of the unintended consequences caused by the rapid expansion of renewable energy.

Europe’s manufacturers are rapidly losing ground to international competition. Instead of putting money into the energy-expensive EU, investors are pouring money into the US, where energy prices have fallen to one-third of those in the EU, thanks to the shale gas revolution.

The naive assumption of policymakers that Europe’s main competitors would follow the shift from cheap fossil fuels to expensive green energy has not materialised. Europe, The Washington Post recently warned, “has become a green-energy basket case. Instead of a model for the world to emulate, Europe has become a model of what not to do.”

Europe’s strategy was founded on two fears: first, that global warming was an urgent threat that needed to be prevented imminently and at all costs; and second, that the world was running out of fossil fuels, which meant oil and gas would become ever more expensive. Both conjectures, however, turned out to be wrong.

The result of a fear-driven gamble with the Continent’s industrial future is a costly shambles that threatens to undercut Europe’s economic and political position in a world that is sensibly refusing to follow its lead.

Germany’s green energy strategy is likely to change significantly after federal elections on September 22; Merkel has promised voters to drastically curtail the €20bn burden they have to pay renewable energy investors every year should she win.

Australians would be well advised to watch this green train wreck very closely if they wish to avoid a repeat of the fiasco that is unfolding in Europe.