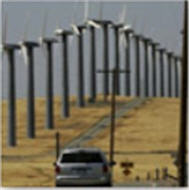 December 7, 2010 – Notorious raptor-killing wind turbines that cover agricultural land at the California’s Altamont Pass will be replaced over four years in an effort to reduce bird deaths by 50 percent, under a lawsuit settlement agreement announced by Attorney General Jerry Brown.

The 5,400 first-generation turbines at the site, which are decades old, will be replaced or switched off by 2015. The California Energy Commission determined that the machines kill 1,766 to 4,271 birds annually.

The agreement settles lawsuits filed by nonprofits Californians for Renewable Energy and the Audubon Society.