Heightened Sensitivities of the Animal Kingdom 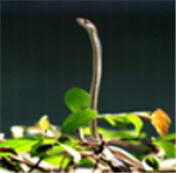 January 17, 2010 – It appears that animals are even more susceptible to low frequency noise than humans.

The animal kingdom relies upon a wide range of sound frequencies inaudible to humans. Within these sensitive habitats, almost no background noise is experienced. The low frequency noise and vibration projected (and transmitted through the earth) by industrial wind turbine operation is most certainly threatening or confusing to wildlife. The hearing and vibration sensitivity of most creatures in the wild is far more acute than human sound perception.

Confusion by sound emanations can lead to the failure in hunting success, self-defense and, ultimately, survival. Snakes, for example, which rely extensively upon their perception of vibration, are particularly sensitive to habitat disturbance from industrial developments.

The noise pollution at higher frequencies may explain the catastrophic effect wind turbines are having on bats, a significant keystone species within the balance of nature. Permeating a large area of natural habitat with extraneous noise pollution will have obvious repercussions for the survival of species dependent on the special characteristics of these unique refuges and, as has been observed by biologists, lead to permanent abandonment.