How About Watching Sunsets Through the Blades of Wind Turbines in Lake Erie?

Wind turbines offshore – yes, they want to put them offshore in the lake, too. Won’t those look great? Watch the sun slowly set behind the spinning blades, kinda spoils the moment, don’t you think? 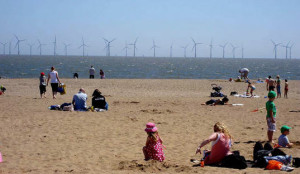 For those of you living closer to the lake, you may be surprised to learn our representatives want to build industrial, utility scale, wind turbine installations in Lake Erie. You may have seen or heard of something happening off the shores of Cleveland, Ohio, that’s getting some attention in the news, but you may want to look a little closer to home, they want to put them offshore of Erie County in Pennsylvania, too!

For those of us in North East, you might also be surprised to learn that Curt Sonney, our PA state representative, was the prime sponsor of House Bill 568:

An Act authorizing the Department of General Services to lease submerged lands in excess of 25 acres within Erie County, for the assessment, development, construction and operation of utility scale offshore wind, solar or kinetic energy generation facilities

That “in excess of 25 acres” may not seem too big, until you read this:

The Department of General Services, acting on behalf of the Commonwealth, may lease submerged lands equal to or greater than 25 acres, but not in excess of 10,000 contiguous acres, within the bed of Lake Erie in Erie County

So the bill means leasing somewhere between 25 and 10,000 acres. That’s quite the little swath of Lake Erie.

What was he thinking?

Did Curt Sonney ask anyone what they thought of putting industrial wind turbines in the lake? Did he just get swept up in the “green energy” hype and put a bill together to show he’s part of the team? Do all of you who enjoy the beautiful sunsets along the beach think they would be enhanced by seeing the sun set behind the spinning blades of huge wind turbines? Sure would change the view, don’t you think?

Well, the wind in the lake is better than the wind up on the ridge in North East, so developers and our state representative want to improve the natural beauty of the lake with turbines offshore. For those North East residents who live along Route 5 and think they can tolerate industrial wind turbines up on the ridge, you might want to pay attention. They’re coming after you, too!

Sometimes you wish your representatives would simply do nothing instead of coming up with ideas like this. If you have questions or concerns about industrial wind turbines offshore in Lake Erie, get in touch with Curt Sonney and let him know.