David Lappi is a geologist from Alaska who has sent in a set of beautiful graphs–including an especially prosaic one of the last 10,000 years in Greenland–that he put together himself (and which I’ve copied here at the top).

If you wonder where today’s temperature fits in with the grand scheme of time on Earth since the dinosaurs were wiped out, here’s the history. We start with the whole 65 million years, then zoom in, and zoom in again to the last 12,000 from both ends of the world. What’s obvious is that in terms of homo sapiens history, things are warm now (because we’re not in an ice age). But, in terms of homo sapiens civilization, things are cooler than usual, and appear to be cooling.

Then again, since T-rex & Co. vanished, it’s been one long slide down the thermometer, and our current “record heatwave” is far cooler than normal. The dinosaurs would have scoffed at us: “What? You think this is warm?”

With so much volatility in the graphs, anyone could play “pick a trend” and depending on which dot you start from, you can get any trend you want. — Jo

The following two graphs (images created by Robert A. Rohde / Global Warming Art) are climate records based on oxygen isotope thermometry of deep-ocean sediment cores from many parts of the world [1]). On both graphs, colder temperatures are toward the bottom, and warmer temperatures toward the top. Significant temperature events on the first graph show the start and end of Antarctic glaciation 34 and 25 million years ago, and the resumption of glaciation about 13 million years ago. It is obvious from the graph that we are now living in the coldest period of Earth’s history for the last 65 million years. Despite recent rumors of global warming, we are actually in a deep freeze. 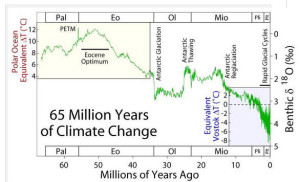 To read the rest of the article