I’m writing these words in what was formerly one of the loveliest valleys in all of Wales. To be fair, the Edw valley still is pretty spectacular. But this year, for the first time in the decade or more I’ve been holidaying here, I no longer look at the white houses dotting the valley and wish one day that I could own one. 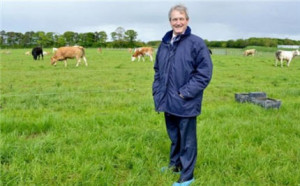 Why don’t I wish to buy my dream home in my dream valley any more? Because the greed and selfishness of a local sheep farmer has killed it, that’s why. I’m sure he doesn’t see it that way. I’m sure if you asked him he’d come up with some guff about how he needed to “diversify”, and how it would save on his energy costs and enable him to farm more sustainably. But the fact is that the poxy wind turbine which this ghastly man has erected on a promontory visible from almost every high point in the area – not to mention the bedroom window of our beloved rental cottage – has changed the character of the Edw valley forever. For centuries, millennia even, this idyllic, breathtakingly beautiful spot has survived untarnished by any form of obtrusive industrial development. No longer.

Now for me, that turbine is a minor irritant: I only have to put up with it for two weeks in the year. The people I feel sorry for are the poor buggers who have to live here permanently: the B & B owners, the people who run pony treks and riding stables, the retirees whose nest egg lies mainly in the value of their properties. How can it possibly be right or just that while this sheep farmer makes thousands of pounds per year as a result of the whopping subsidies paid for the intermittent, unreliable energy produced by his poxy turbine, everyone else for miles around is made to suffer?

The tragedy of the Edw Valley is, unfortunately, a tragedy is being repeated across our once-magnificent country. Especially in poor Scotland – a crime for which Alex Salmond and his co-conspirators will one day burn in hell. I do find it particularly odd that while on the one hand our Coalition has decided to try and claw its way out of recession by pump-priming a new housing bubble, it is simultaneously enacting energy policies guaranteed to reduce the value of rural properties by many billions of pounds.

As I have reported before, rural estate agents (and the poor sods trying to sell their turbine-blighted homes) have long known about the deleterious effects of wind turbines on property values. Price drops of 25 per cent are not uncommon and there have been cases where houses located near wind turbines have been rendered simply unsellable.

This ought to have been a major national scandal years ago. The only reason it hasn’t is because of what amounts to a cover up by a number of institutions including the Royal Institute of Chartered Surveyors, RenewableUK, the Department of Energy and Climate Change and the Advertising Standards Authority, each of which has helped promulgate the outrageous lie that there is “no definitive answer” to the question as to whether turbines affect property prices. In every case, the people responsible for this claim are either disgusting liars or useful idiots – and if you want to know why I feel so confident in tarring them thus, just re-read the last blog I posted on the subject.

You’ll gather, then, that I’m very much looking forward to reading the first official admission of the blighting effects of wind turbines on property prices, to appear in a report commissioned for the Department of the Environment, Food and Rural Affairs by the estimable Owen Paterson. It’s no wonder the slithy Ed Davey is trying so hard (though of course he denies this) to suppress it. Once news gets out, it will open the floodgates for thousands of claims against the government, wind developers and wind turbine hosts for the loss of property values caused by bat-chomping bird-slicing eco crucifixes.

It will also, of course, give rural communities an even stronger reason to loathe and despise those greedheads within their midst who choose to profit from these monstrosities while all their neighbours not only lose their favourite views and their healthy nights’ sleep but also the value of their properties.

Since it is becoming increasingly clear that the pusillanimous Cameron is quite unprepared to protect rural Britain against the depradations of wind farm zealots like Davey and Tim Yeo and Dale Vince, it may be that communities will have to take matters into their own hand. I’m not arguing for direct action: I don’t believe in violence or threats of violence, either to person or to property. But I do very much believe in the power of ostracism – one of the most effective ways a society can regulate itself according to common values without the need for government meddling.

Anyone who puts a wind turbine on his land fully deserves to be ignored, isolated and loathed by his neighbours. These people have caused more than enough damage with their selfishness and greed: now it’s payback time.