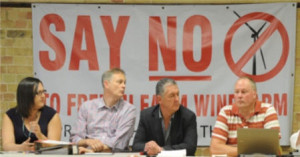 Dr Reed states that “non standard methods” have been used to record bird numbers in the area during breeding season, and that a number of calculations are “unsound” due to other “data deficiencies”.

Dr Reed, states in the report: “The data collected for breeding birds are flawed and unsuited to determine breeding populations and habitat use, and the vantage point data have a number of basic errors, from distances used, through to incorrect hours in collision risk assessment.

“At its simplest in view of the location of the site and the inadequacy of the data, proper data are needed to evaluate the proposal. These are not proper data for planning purposes.”

Mike Greene, a member of the Newborough Landscape Protection Group, which is campaigning against wind farms in the area, said he handed a copy of the document to the city council.

Mr Greene, who is concerned that the energy park application does not show proper concern for wildlife, said: “It’s like going to the doctor’s with the wrong information – you would come back with the wrong diagnosis. ”

Owen Saward, development manager for REG Windpower, the firm behind the plans, said: “Before submitting a comprehensive planning application we spent considerable time studying the potential effects of the wind farm on the local environment, drawing on the expertise of experienced professionals in a number of fields.

“We notified Peterborough City Council of our methods for studying birds and wildlife at an early stage and they will be reviewed by the city council, Natural England and the RSPB before any decision is made.”