The first decision, from Judge Roger Titus of the U.S. District Court for the District of Maryland in December, Beech Ridge v. Animal Welfare Institute (AWI), is clearly having a higher impact on developers, as it showed the courts’ willingness to disallow earlier survey work. Because bats are at greater risk from wind turbines and do not have the same protections as birds, developers who fail to carefully address the complexities of siting wind farms in bat territory may face increased legal challenges.

The much-awaited second decision, from U.S. Fish and Wildlife Service (USFWS) in March, stopped short of putting the greater sage grouse under Endangered Species Act (ESA) protection, as some had expected. Instead, the flagship species for Western sagebrush habitat was put on a candidate list as warranted for future action, meaning states will continue to be responsible for its management.

Private landowners, corporations, state or local governments, tribes or other non-federal landowners who conduct activities that might incidentally harm (or “take”) endangered or threatened wildlife on their land can be sued under the Endangered Species Act unless they obtain an incidental Take Permit from the USFWS. In Beech Ridge v. AWI, Judge Titus ruled that, without an ITP on the Indiana bat, Chicago-based Invenergy LLC could not build more than the 40 turbines already under construction in West Virginia and could operate them only in winter, when the bats hibernate. Invenergy has initiated the one- to two-year ITP process for the first time in its history in order to erect an additional 33 turbines that it was planning to build, according to David Groberg, Invenergy’s vice president of business development and lead developer of the project.

Some commentators have written that the judge overreached. But Dr. Thomas Kunz, director of the Center for Ecology and Conservation Biology at Boston University, who testified extensively in the case, said he believes Judge Titus considered the survey work done by Invenergy’s consultant BHE Environmental Inc inadequate. The court opinion notes that despite recommendations from Fish & Wildlife and the West Virginia Department of Natural Resources to set up mist nets to capture bats during the fall migration when the majority of bat mortality occurs, BHE mist-netted only in the summer. But BHE president John Bruck said the scope of all of its mist-netting and bat cave surveys were coordinated with and approved by the Fish & Wildlife regional field office.

Dr. Kunz said BHE made a stronger case for the plaintiff by failing to present acoustic evidence of the presence of Indiana bats (pictured above). Such acoustic evidence, said Bruck, was never requested by the Fish & Wildlife field office and the recordings were made by an employee of a BHE subcontractor without any authorization or supervision. Furthermore, Bruck said, the technology to accurately analyze acoustic data to a specific species did not exist and scientific reviews remain mixed as to the accuracy of identifying specific bat species from acoustic data.

“For bats,” said Laurie Jodziewicz, siting manager for the American Wind Energy Association, “I think the jury is still out as to how to best site projects. We don’t really know that yet, but we’re learning more and more each day. Bats appear to be a much bigger issue for the industry because there is some kind of attraction [to turbines], and the impacts are higher.”

Indeed, says Invenergy’s Groberg, the Beech Ridge case has spurred the firm to “take another look” at how it handles ESA issues. “It raises lots of questions around Indiana bats. We had a take of an Indiana bat in Ohio, where no one expected it, far from hibernacula [bat caves], in farm country. The range of the Indiana bat is broad, including even Pennsylvania and New York,” he said.

In fact, said Kunz, developers who count on their site being far enough away from bat hibernacula to eliminate the risk of impacts, “may find themselves sorely disappointed.”

One developer, Highland New Wind Development LLC, however, seems to have adopted that view for its proposed project in Highland County, Virginia, despite USFWS recommendations and the threat of a lawsuit from Highland Citizens for Responsible Development, an action group that has been fighting the wind farm since 2005.

Since the project’s inception in 2002 when it applied for a USDA federal loan, USFWS has told Highland Wind that because two at-risk species of bat populate the area, it should get an ITP. Highland Wind spokesman Frank Maisano said the developer “is likely” to pursue an ITP, but that “in-depth studies” it had conducted had identified no endangered bats in the area and that the developer was not required to get one before construction. Furthermore, he said Highland Wind told him that because the site is about 20 miles from bat hibernacula and consists of bald-top, not forested, ridges, the project “is not likely to have a big impact” on bat populations.

Kunz said that bats appear to be attracted to forest edge habitats.

Laurie Berman, president of Highland Citizens, said Highland Wind “knows it has an issue to deal with, and we don’t understand why they want to wait [to get an ITP].” The group will decide its course of action in the next few weeks, she said. Its Roanoke-based law firm, Wood Rogers PLC, has advised the Highland County Board of Supervisors that allowing Highland New Wind to proceed without the ITP would place the county, as well as the developer, in legal jeopardy.

Kim Smith, a USFWS biologist in Virginia who has followed the Highland project since 2002, noted that getting the ITP is, indeed up to the developer, but that “if they don’t get one and take occurs, they are not protected.”

Sage Grouse
On the other side of the country, USFWS’s “warranted for listing” ruling for the greater sage grouse means developers of sites in its habitat are still subject to state, rather than federal ESA, management rules. Of all of the Western states that comprise sage grouse habitat, Wyoming is one of the most important and has the most advanced—some in industry would say extreme—rules for its management.

Following Governor Dave Freudenthal’s August, 2008 Executive Order, Wyoming’s policy prohibits development in core sage grouse (image below) habitat unless “it can be demonstrated by the state agency that the activity will not cause declines in Greater Sage-Grouse populations.” “Core” habitat is defined as land with larger breeding populations and old-growth sagebrush and comprises approximately 23% of the state, said Brian Rutledge, executive director and vice president of Audubon Wyoming and a member of the Governor’s Sage Grouse Implementation Team. 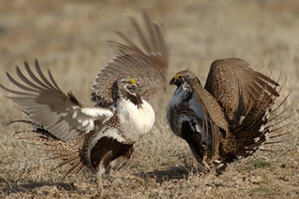 Since the governor’s order, the wind industry has seen the policy as discriminatory. AWEA’s Jodziewicz said, “We don’t agree that there are places where under no circumstances wind can be developed, to have 20% of the state of Wyoming off-limits, considering that oil and gas [installations] are [already] present.”

Jodziewicz said that even though wind farms are not specifically banned unless developers are allowed to build to study and determine the mitigation measures needed to assure a net negative impact, it is a de facto ban. Rene Braud, director of permitting and environmental affairs for Horizon Wind Energy and member of the Sage Grouse Team added, “The core strategy leaves us with no options. Some of the best wind is in sage grouse habitat. There is no science, no studies on the effects of wind facilities on sage grouse. We are offering studies, but are precluded from building in sage grouse habitat so we have no opportunity to collect data.”

Rutledge disagrees. “From scientific study, we know that grouse are disturbed by vertical development, even juniper growth, by overhead motion, noise, roads and traffic, which makes it pretty rough on wind. One of most challenged ecosystems in North America is sagebrush and prairie grasslands [and] the sage grouse is a flagship species for the ecosystem. We are pro-wind, but we want to see it developed in a green manner, so we have said, do your research in the 70% that is [less] occupied by sage grouse and leave the 23% alone,” he says.

Despite the obstacles in both territories, development in both regions is moving forward.

Invenergy’s Groberg said the company has other projects that are moving forward within the range of the Indiana bat, and Highland New Wind has “lots of interest” from potential investors, said spokesman Maisano.

Meanwhile, in Wyoming, Bob Budd, chairman of the Sage Grouse Team said, “We are refining what we need to do in the core areas, and outside the core areas, we are trying to make [development] as easy as we can. It is going to evolve a tremendous amount, as we get more scientific information as to what is needed by the species.”

Marsha Johnston is a DC-based freelance journalist, specializing in renewable energy, wildlife/wild space conservation and sustainable development issues. She can be found at StewardingtheWild.wordpress.com.