It is a landscape immortalised on canvas by JMW Turner and in verse by William Wordsworth, but Bolton Abbey, in the Yorkshire Dales, could be “ruined” by the construction of two wind turbines. 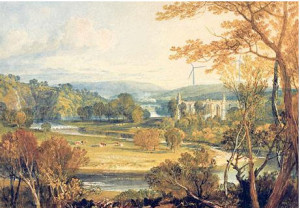 The turbines will each be the size of the London Eye and neighbours fear that the scene will be “irrevocably damaged” and that visitors will be put off going to the beauty spot.

The abbey, on the banks of the Wharfe river, is set in almost 30,000 acres of countryside owned by the Duke of Devonshire.

Yorkshire Water plans to build the two 410ft turbines in a field overlooking the abbey, which forms the background of a watercolour painted by Turner in 1809, now hanging in the British Museum.

The scene was also described by Wordsworth in the poem, The White Doe of Rylstone, after he visited the abbey in 1807.

The company wants the turbines to replace four older ones, which are 140ft high. The turbines generate power to keep Chelker Reservoir topped up from the Wharfe and also to pump water to the Bradford area.

But Patrick Lang, a 79-year-old retired engineer, and member of Parishioners Against Chelker Turbines, said: “It’s an insult to the memory of Turner and Wordsworth. The idea that you can even consider ruining the landscape of an area of such outstanding beauty that it inspired our greatest artists and poets is ludicrous.

What does it say about the culture we have in this country to build and build without due consideration of the impact it is having on our countryside?”

The Duke of Devonshire could refuse permission for the wind farm to be built, but has decided to let the planning application by Yorkshire Water go ahead.

Ben Hayes, his agent, said: “We appreciate that the proposal is emotive. The estate is one of the many interested parties and we must rely on the democratic process so that the arguments for and against are heard.”

As well as blighting the area, local people said the turbines will make excessive noise and the throbbing and flicker effect of the spinning blades will lead to health problems such as tinnitus, headaches, depression and stress.

Danny and Vanessa Leigh live with their three children in East Berwick, beneath the proposed wind farm. Mrs Leigh said: “To live only 1,000ft from a 410ft turbine in a quiet rural setting is frightening for us. The machines will completely and utterly dominate the landscape and the noise emitted will be overbearing.”

Yorkshire Water said: “Our proposed investment is part of a wider strategy which is also seeing us invest in hydropower schemes and new combined heat and power plants. Our wind turbines at Chelker have been an established part of the landscape for more than 17 years, providing 15 per cent of our on-site energy needs.

The turbines we wish to construct are much more technologically advanced. We believe the size we have chosen is the best fit for this site.”

The planning decision rests with the local council. Colin Walker, director of environment at Craven District Council, said: “We will consider the application in light of both local and national policy. We have gone to great lengths to carry out a detailed assessment [which] is ongoing. It will be up to elected members to make the right decision.”