December 10, 2010 – The Royal Society for the Protection of Birds (RSPB) has written a letter of objection regarding the proposals by Ecotricity to build four wind turbines, each with a maximum overall height of up to 120m, on land at Poplar Farm, West Huntspill. 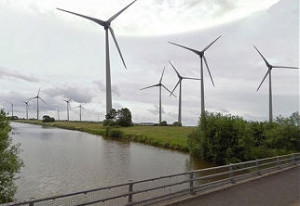 “The Poplar Farm site lies within the broad flight corridor for birds moving between the Severn Estuary and Somerset Levels and Moors Special Protection Areas and wetlands. These two sites are internationally important for ducks, swans and wading birds in winter, spring and autumn migration.”

He goes on to state: “There is evidence of regular movement of waterbirds between the two Special Protection Areas through this broad corridor. We have met with Ecotricity to discuss our concerns about potential bird strike issues and the longer term barrier effects that development in this corridor may pose.”

Mr Archer adds that Ecotricity has agreed with the RSPB, Natural England and Somerset Wildlife Trust to carry out a full radar survey of migratory birds at the site this winter in order to get a better understanding of bird movements. EDF has also agreed to carry out a similar study at the nearby Withy Farm site.

Mr Archer urges Sedgemoor District Council to delay a decision on the application by Ecotricity until the results are known and says that the RSPB is objecting to the proposals until the study’s results have been received.

John Wakefield from the West Huntspill Wind Farm Action Group told Burnham-On-Sea.com this week: “Ecotricity’s Environmental Statement in its planning application states: ‘The site does not lie on any recognised bird migration routes and is therefore unlikely to be utilised by significant numbers of migratory birds. Numbers of migratory birds noted during the baseline surveys were small and clearly insignificant.'”

Mr Wakefield claims: “This is known to be false by anyone who lives in the vicinity and by bird enthusiasts from further afield as well as the experts from the RSPB, Natural England and Somerset Wildlife Trust, but apparently not by the so-called experts that carried out the survey on behalf of the power company.”

“This wall of rotating blades spread over half a mile wide could devastate flocks of geese, swans or ducks that have the misfortune to fly over the site.”

“Ducks, such as widgeon, can travel out twice a day along this flight path. We, as humans, can recognize wind turbine blades moving through the sky on an axis. Birds and bats cannot, whether hunting, migrating or just flying, on the thermals. These innocent creatures cannot perceive the movement of the blades and consequently wind turbines are always going to be invisible to them.”

Video of a bird being killed by the moving blades of a wind turbine was shown to an audience of 100 people at a wind farm protest meeting near Burnham-On-Sea in November, as reported here.

Mike Cheshire, spokesperson for Ecotricity, told Burnham-On-Sea.com: “Having carried out over a full year’s worth of bird surveys, we are confident that the site is a suitable one for a wind park. We have been working with RSPB and Natural England who have seen all the data collected to date, and we’ve agreed to complete some further assessments on wider bird movements to give them added comfort when making their final consideration.”

“As with many things at the moment in the UK, the radar system used is being affected by the severe weather so, after speaking with RSPB and Natural England, the work will be delayed until January. We were aware that RSPB intended to place this holding objection on the application in the meantime, which will be reviewed once they have seen the newly collected data.”The Royal Society for the Protection of Birds has written a letter of objection regarding the proposals by Ecotricity to build four wind turbines, each with a maximum overall height of up to 120m, on land at Poplar Farm, West Huntspill.

Courtesy of Burnham on the Sea.com