Spain: Still in business, these “experts” threaten other species by using the same the method

Save the Eagles International blows the whistle on a firm which provides advice to Australian authorities. Says STEI president Mark Duchamp: “if an engineer certified a bridge for 100 cars but it collapsed the next day under the weight of a single automobile, you would fire him wouldn´t you?” He continues: “if a zoologist reported that a wind farm posed no risk to an endangered species, but a reality check revealed that he found “1” when the reply was “100”, would you still trust him?”

Mr. Duchamp claims he found two errors amounting to that much distortion in a report assessing the risk posed by 7 wind farms to the survival of the Tasmanian Wedge-tailed Eagle. “As a result, the risk was misrepresented and the species is now condemned to rapid extinction”. He pinpoints the errors in an open letter reproduced below.

STEI holds the authors of the report, Biosis Research Pty. Ltd., responsible for this biodiversity disaster. “All over the world, conservationists were disturbed to learn that rare TWT eagles are being killed in significant numbers at the Woolnorth wind farm” says Duchamp, who can’t understand why these consultants are still in business. “They are now assessing a highly sensitive windfarm project in Victoria, but are using the same erroneous parameters that failed in Tasmania. They claim to have corrected them, but this is not true. They even added more distortion.” This manipulation, says STEI, allows them to predict insignificant mortality where in fact 200 to 300 eagles will die. 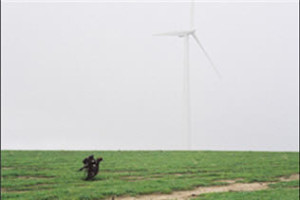 Wedge-tailed Eagle crippled by a wind turbine at Starfish Hill wind farm, South Australia. Turbine blades travel at speeds up to 300 kph at the tip, but appear to move leisurely. This fools the birds.

Australians may have been misled about other species as well, warns Duchamp. On numerous occasions the services of BIOSIS have been used, and negligible mortality has been predicted. He has in mind the cases of the White-bellied Sea Eagle, the Orange-bellied Parrot, the Swift Parrot, and the Brolga, some of them listed as endangered.

STEI concludes: “the fate of Australia’s spectacular bird life should not be left in the hands of “hired guns” consultants in the pay of windfarm interests, public or private.”

Save the Eagles International is a platform constituted by ornithologists and nature conservationists advocating for a realistic assessment of the bird/windfarm problem. Please scroll down to view their open letter exposing the catastrophic error, the misrepresentations and the manipulations. 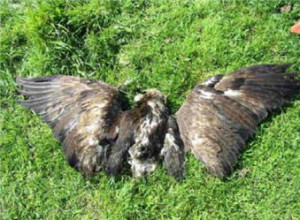