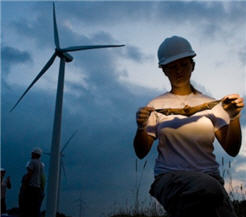 Wind turbines only last for ‘half as long as previously thought’, according to a new study. But even in their short lifespans, those turbines can do a lot of damage. Wind farms are devastating populations of rare birds and bats across the world, driving some to the point of extinction. Most environmentalists just don’t want to know. Because they’re so desperate to believe in renewable energy, they’re in a state of denial. But the evidence suggests that, this century at least, renewables pose a far greater threat to wildlife than climate change.

I’m a lecturer in biological and human sciences at Oxford university. I trained as a zoologist, I’ve worked as an environmental consultant — conducting impact assessments on projects like the Folkestone-to-London rail link — and I now teach ecology and conservation. Though I started out neutral on renewable energy, I’ve since seen the havoc wreaked on wildlife by wind power, hydro power, biofuels and tidal barrages. The environmentalists who support such projects do so for ideological reasons. What few of them have in their heads, though, is the consolation of science.

My speciality is species extinction. When I was a child, my father used to tell me about all the animals he’d seen growing up in Kent — the grass snakes, the lime hawk moths — and what shocked me when we went looking for them was how few there were left. Species extinction is a serious issue: around the world we’re losing up to 40 a day. Yet environmentalists are urging us to adopt technologies that are hastening this process. Among the most destructive of these is wind power.

Every year in Spain alone — according to research by the conservation group SEO/Birdlife — between 6 and 18 million birds and bats are killed by wind farms. They kill roughly twice as many bats as birds. This breaks down as approximately 110–330 birds per turbine per year and 200–670 bats per year. And these figures may be conservative if you compare them to statistics published in December 2002 by the California Energy Commission: ‘In a summary of avian impacts at wind turbines by Benner et al (1993) bird deaths per turbine per year were as high as 309 in Germany and 895 in Sweden.’

Because wind farms tend to be built on uplands, where there are good thermals, they kill a disproportionate number of raptors. In Australia, the Tasmanian wedge-tailed eagle is threatened with global extinction by wind farms. In North America, wind farms are killing tens of thousands of raptors including golden eagles and America’s national bird, the bald eagle. In Spain, the Egyptian vulture is threatened, as too is the Griffon vulture — 400 of which were killed in one year at Navarra alone. Norwegian wind farms kill over ten white-tailed eagles per year and the population of Smøla has been severely impacted by turbines built against the opposition of ornithologists.

Nor are many other avian species safe. In North America, for example, proposed wind farms on the Great Lakes would kill large numbers of migratory songbirds. In the Atlantic, seabirds such as the Manx Shearwater are threatened. Offshore wind farms are just as bad as onshore ones, posing a growing threat to seabirds and migratory birds, and reducing habitat availability for marine birds (such as common scoter and eider ducks).
‘Uh-oh.’

I’ve heard it suggested that birds will soon adapt to avoid turbine blades. But your ability to learn something when you’ve been whacked on the head by an object traveling at 200 mph is limited. And besides, this comes from a complete misconception of how long it takes species to evolve. Birds have been flying, unimpeded, through the skies for millions of years. They’re hardly going to alter their habits in a few months. You hear similar nonsense from environmentalists about so-called habitat ‘mitigation’. There has been talk, for example, during proposals to build a Severn barrage, that all the waders displaced by the destruction of the mud flats can have their inter-tidal habitat replaced elsewhere. It may be what developers and governments want to hear, but recreating such habitats would take centuries not years — even if space were available. The birds wouldn’t move on somewhere else. They’d just starve to death.

Loss of habitat is the single biggest cause of species extinction. Wind farms not only reduce habitat size but create ‘population sinks’ — zones which attract animals and then kill them. My colleague Mark Duchamp suggests birds are lured in because they see the turbines as perching sites and also because wind towers (because of the grass variations underneath) seem to attract more prey. The turbines also attract bats, whose wholesale destruction poses an ever more serious conservation concern.

Bats are what is known as K-selected species: they reproduce very slowly, live a long time and are easy to wipe out. Having evolved with few predators — flying at night helps — bats did very well with this strategy until the modern world. This is why they are so heavily protected by so many conventions and regulations: the biggest threats to their survival are made by us.

And the worst threat of all right now is wind turbines. A recent study in Germany by the Leibniz Institute for Zoo and Wildlife Research showed that bats killed by German turbines may have come from places 1,000 or more miles away. This would suggest that German turbines — which an earlier study claims kill more than 200,000 bats a year — may be depressing populations across the entire northeastern portion of Europe. Some studies in the US have put the death toll as high as 70 bats per installed megawatt per year: with 40,000 MW of turbines currently installed in the US and Canada. This would give an annual death toll of up to three -million.

Why is the public not more aware of this carnage? First, because the wind industry (with the shameful complicity of some ornithological organisations) has gone to great trouble to cover it up — to the extent of burying the corpses of victims. Second, because the ongoing obsession with climate change means that many environmentalists are turning a blind eye to the ecological costs of renewable energy. What they clearly don’t appreciate — for they know next to nothing about biology — is that most of the species they claim are threatened by ‘climate change’ have already survived 10 to 20 ice ages, and sea-level rises far more dramatic than any we have experienced in recent millennia or expect in the next few centuries. Climate change won’t drive those species to extinction; well-meaning environmentalists might.