April 16, 2012
Save the Eagles International 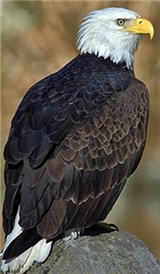 The British public is being misinformed regarding bird mortality at wind farms, denounce Save the Eagles International (STEI) and the World Council for Nature (WCFN). It is contrary to fact to pretend that these industrial structures are “carefully sited” so as to avoid risks to birds and bats. It is equally false to allege that grouse and other ground-nesting birds don’t mind laying their eggs under wind turbines, or that raptors avoid these dangerous areas.

In a recent article, The Guardian states: “Studies in the UK had found evidence that birds of prey in particular avoided wind farms” (1). But if you look closely at the picture shown in the article, you’ll notice that the two birds flying between the turbines are raptors, red kites in fact, which were reintroduced in the UK at great cost. “So! – they avoid wind farms, eh?” – quips STEI’s President Mark Duchamp.

In Germany, where a few wind farms have been loosely monitored for bird and bat mortality, the government has disclosed the number of carcasses reported so far: 69 eagles, 186 kites, 192 buzzards, 13 harriers, 59 falcons, 12 hawks, 7 ospreys, plus hundreds more birds of all sizes and even more bats (2). “These figures are just a small sample of the ongoing massacre”, comments Duchamp, who cites this example: “Ubbo Mammen, an ornithologist commissioned by the German government, estimates that 200-300 Red Kites are being killed yearly by wind turbines in Germany” (3). These machines are driving many rare species into extinction, warns Mark.

In the UK, few raptor deaths leaked through what STEI calls “the windfarm cover-up”: three red kites, one osprey, and one sea eagle. “Officially, the eagle died of a heart attack”, mocks Duchamp. “In the UK, wind farms are not being monitored for bird mortality: this is how the issue is being kept from the public’s eye. Scavengers and wind farm employees dispose of the dead bodies, so it is extremely rare for a dead eagle or osprey to be found by some nosy trespasser.”

Birds and bats are being slaughtered by the million in other countries. In Spain, the ornithological society SEO/Birdlife recently estimated that the 800 Spanish wind farms were killing between 6 and 18 million birds and bats a year (4). Unlike birds killed by cars and cats, these include eagles and many other rare species.

But in the UK, bird charities hold the wind industry in great esteem, on account of global warming but also for their financial contributions to bird research, notes STEI. Hence the new study by researchers from the RSPB and BTO, which was just hailed by The Guardian in these terms: “Windfarms do not cause long-term damage to bird populations, study finds” (1). But raptors have been excluded from the study, remarks Duchamp. “As for the few bird species that were considered, the research is anything but convincing; besides, other studies have shown opposite results”. Mark remembers that, years ago, an RSPB officer wrote the following about the Edinbane project: “they (red grouse) have been known to collide with turbine structures and have shown population declines associated with windfarm developments elsewhere” (5).

The BBC, referring to the same study, recently proclaimed: “Wind farms ‘not major bird mincers’ ” (6). STEI wonders how this conclusion may be drawn from such an inconclusive and suspicious study, whose scope is not mortality, and only targets the “density” of selected non-raptor species. As for earlier claims that wind farms in the UK are “carefully sited”, Mark notes that many have been placed in the worst possible locations, where they will mince Scottish eagles into extinction: Eishken (aka Eisgein or Eisgen), Pairc, Pentland Road, Edinbane, Ben Aketil, various eagle ranges in Argyll, etc. “Hypocrisy and deceit are rampant,” laments Duchamp.